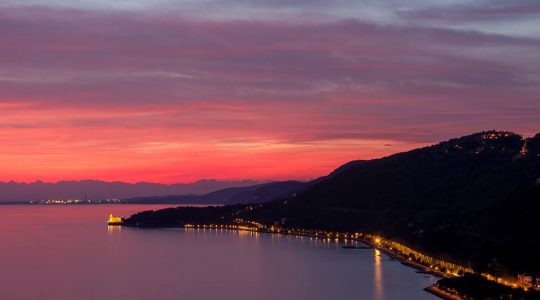 Valentine’s Day in Italy: the romantic walks of Trieste

Among all the walks in and around Trieste, romantic itineraries are definitely those that have more emotions to give away.

The city, it is well known, has a special charm. Part of this charm is due to the sea. Its seafront, towards one of the most poetic and beautiful sunsets in the world, when in the clear days the sky is tinged with a thousand shades of red, is a particularly evocative place.

If among the dreams in the drawer you have “organize romantic holidays in Italy”, then do not miss this guide to the romantic excursions of Trieste. 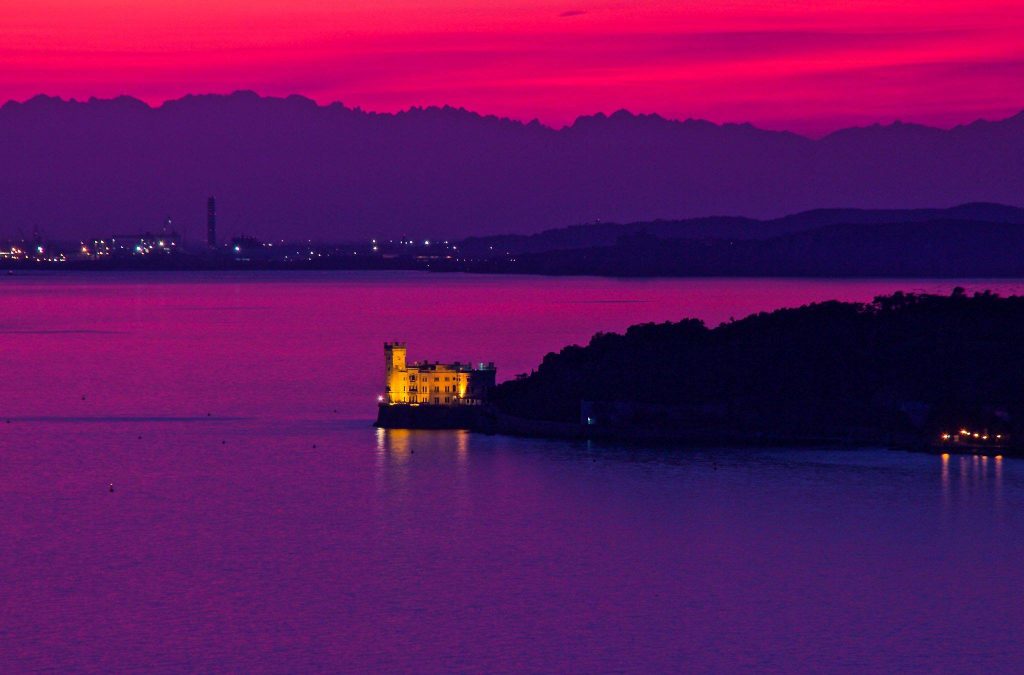 THE MOLO AUDACE (the Bold Pier 😉

The favorite walk by lovers is in fact on the Molo Audace, the mighty quay which takes its name from the first Italian ship landed in Trieste thus sanctioning the passage of the city to Italy in 1918. The “Molo Audace” remains in the memory above all as a place consecrated with love. 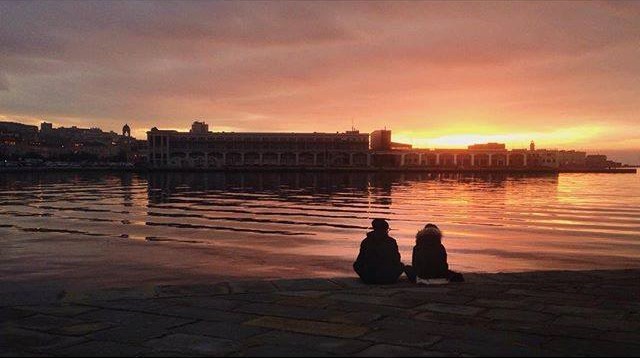 At the beginning of the “Molo Audace”, millions of dates were given. Walk (maybe hand in hand) its 246 meters shows you the way to the Gulf, how to get the bottom of it and feel the real essence of the sea. It makes you feel like you are never alone when you turn and admire “Piazza Unità”,with all the banks and the “Carso” dotted with lights. It is the elegant gateway to an enveloping and spiritual feeling.

THE CASTLE OF MIRAMARE

The second destination full of languid and never-ending romanticism is the walk from Barcola to the Castle of Miramare. As for the other excursions to Trieste, the recommended time is obviously by the sunset. And above all it is wonderful if you want a longer walk. 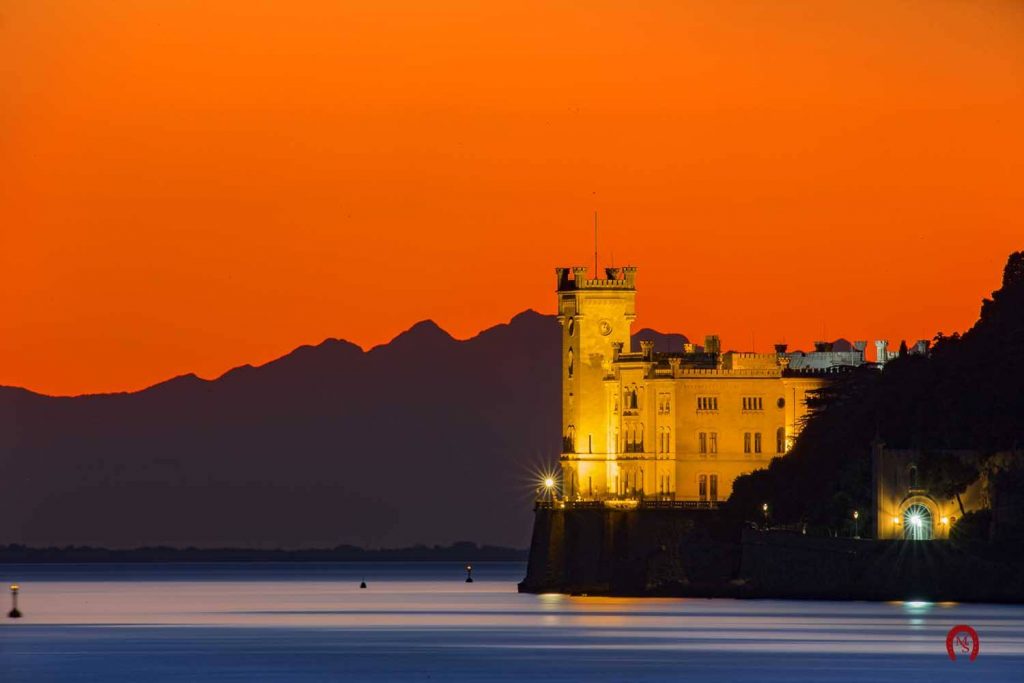 To the people of Trieste, the Castle of Miramare immediately evokes the tragic story of Maximilian and Charlotte of Hapsburg. Every room, every wall and every piece of furniture tells the dreams of the two young lovers, as well as their sad destiny.

Trieste, just like Verona, has its tragic and passionate love story to tell. Certainly less known, but not less rich of mysterious intrigues.

Massimiliano and Carlotta of Austria, in love and married for their true love, and not only for family designs, choose Trieste as the place to establish their home and have the mythical white turreted castle built. The idyll, however, breaks up when Massimiliano agrees to become the emperor of Mexico, ending up facing an entire country rising against him.

With the end of Massimiliano, also the dream of love with the beautiful Carlotta comes to an end. She who followed him until late in Mexico, had to return to Europe: the situation was now too dangerous. He seemed to foresee the fate of her husband on his return to Miramare: he began to show signs of imbalance. Therefore for some time he was also kept under close observation within the green park of the castle. After the tragic death of her husband, Carlotta only remained to give herself to madness.

In 1867 Massimiliano was captured and shot at only 34 years of age. In the same period of time a lady in the company of Carlotta, Amalia Stöger, was sadly found hanged in a room of the castle with 8 rounds of lace around the neck.

There were Immediately lots of rumors about the mad love of Amalia for Maximilian, and the discovery of some letters sent by him would prove the existence of this triangle love. Even more disturbing was the hypothesis that Amalia was tormented by remorse for giving poison to Carlotta  that undermined her reason. There was talk of “poison of the Vaudoux”, a particular drug completely tasteless capable of progressively psyche breaking down. Hence the tragedy of a love spoiled by betrayal and undermined by revenge. 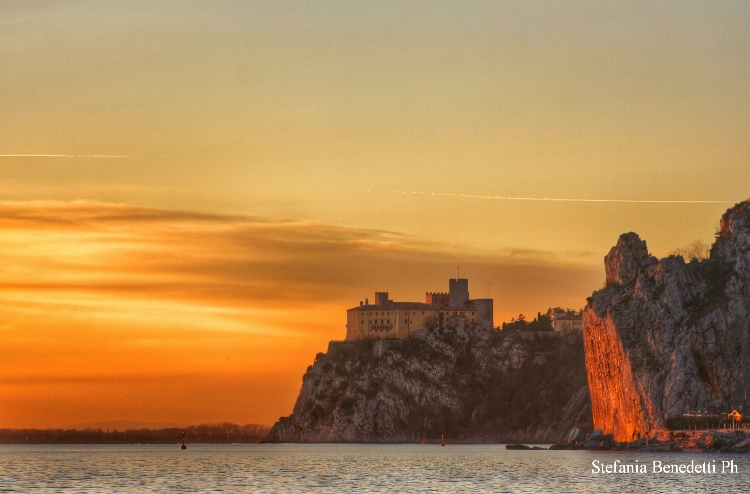 On the other hand, we can speak of sublime poetry if the Duino Castle, nearby Sistiana, is chosen as a romantic destination. The small village overlooking the sea, the castle gardens meticulously cared for and the view that is enjoyed from the cliff overlooking the castle, are the magical potion of sweet romance.

Not surprisingly, Rainer Maria Rilke, considered one of the greatest German-speaking poets for the lyrical intensity of his compositions, here he began writing the ELEGIE DUINESI, which he dedicated to his beloved princess and celebrated patron Marie von Thurn und Taxis. The castle in fact hosted over time many artists such as Johann Strauss, Franz Liszt, Mark Twain and Gabriele D’Annunzio. Marie was a dazzling beauty that certainly must not have left Rilke indifferent. 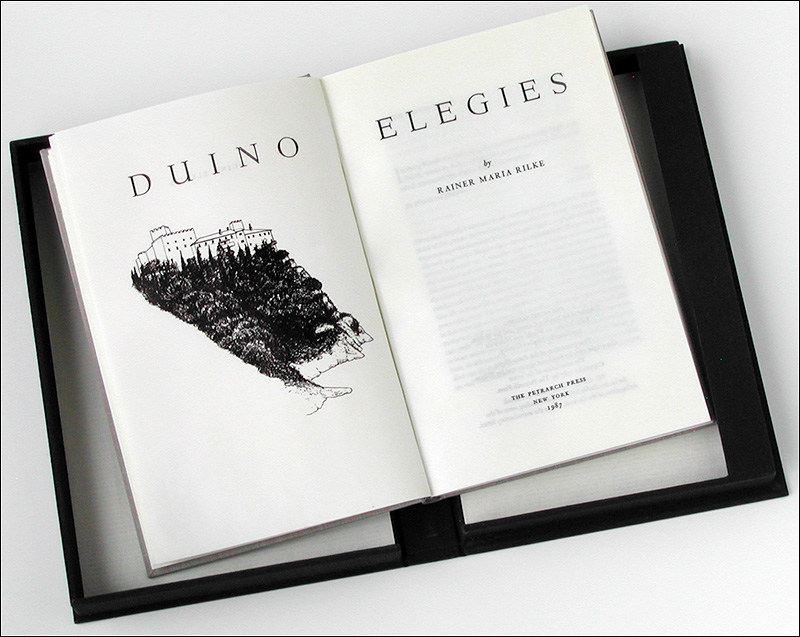 Where to spend Valentine’s Day and romantic breaks?

Trieste is certainly a romantic destination suitable for a Valentine’s Day. We at the Literary Hotel have dedicated to Central European Romanticism and to the month of lovers the vey proposal to make it even more magical according to our recipe based on relax, romance and a private spa. 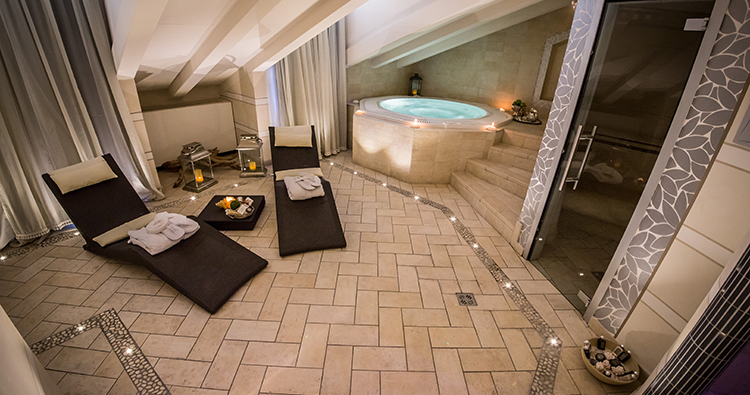