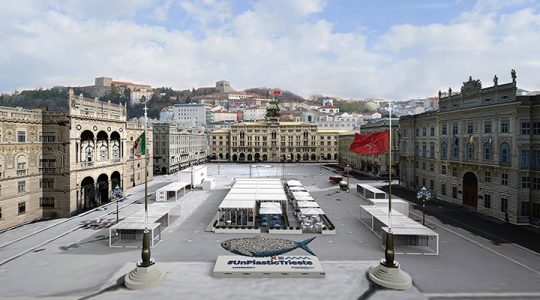 Barcolana 50+1: AN OCEAN OF STORIES

From the 2nd to the 13th of October, the day of the regatta, Trieste is immersed in the great festival of the sea

If the 50th Barcolana brought Trieste back into the Book of Guinness World Records with the largest or the most participated regatta in the world (almost three thousand boats present in the Gulf), the 51st Barcolana will also be dedicated to the environment and books, with 11 consecutive days of festivities!

From this year, not only the Rive, where all sailing boats traditionally dock, will be the place of the party, but also the Piazza Unità d’Italia as itself, symbol of Trieste, or the largest square in the world on the sea will become the fulcrum of food and wine and exhibition event.

Among the big sailors who will be present for the occasion is the British ocean sailor Dee Caffari, who will be the testimonial and the ambassador of the protection of the seas from the plastics as well. With her, also the Argentinian Santiago Lange, gold medalist at the Rio Olympics and the Chinese sailor Vicky Song (坤), the first in her country who has taken part of a sailing trip around the world.

In the week from the 2nd to the 6th of October, spotlights will focus on the Castle of San Giusto with the Barcolana Books, or “An ocean of of stories”, a literary appointment in the most literary city of Italy, marked by the meeting with the authors to talk about the sea and travel from the top of an inimitable location like the “Bastione Rotondo” that dominates the entire Gulf. All the program of Barcolana UN MARE DI RACCONTI (an ocean of stories) can be read here.

It is impossible to forget, among the many challenges that will precede the race, the spectacular Barcolana Classic, a regatta dedicated to vintage wooden hulls, to be held on Saturday the 12th of October, and always on the eve of the main competition, the Barcolana by Night, which will reveal the most creative sailing veils under the moonlight.

Barcolana 51 also wants to look to up to the future by hosting the first “foiling” motorboat, that is capable of flying over water with a lot of crew, as well as a virtual sailing tournament, called e-sailing, which simulates a race thanks to the new generation software.

Guests of the Victoria Literary Hotel will find the complete calendar of the events of these 11 days of celebration in their rooms.

Not only that, the literary hotel is keen to leave a good memory of this first Barcolana in the name of books, by honoring the guests with a kind surprise to their readings and signed by Trieste’s artist Ugo Pierri.

Instead on the environmental front, those who will stay during the days of the regatta will benefit from a tribute fruit of a very felt recycling operation because it concerns our lady Bora, our beloved wind, able to reap dozens and dozens of umbrellas when she comes to visit us. This is what happens to the umbrellas that Victoria puts at her guests’ disposal. This year, however, we have reused the plastic canvas of the broken umbrellas by Bora to make comfortable suitcases for shoes or clothes.

Anyone who may wish to be part of the regatta on a sailboat or from the top of a helicopter will find here all the possibilities to live this unique experience.

However, all those who have already been our guests can request a special rate, by contacting the Front Desk directly at +39 040 3624145 or by writing to info@hotelvictoriatrieste.com