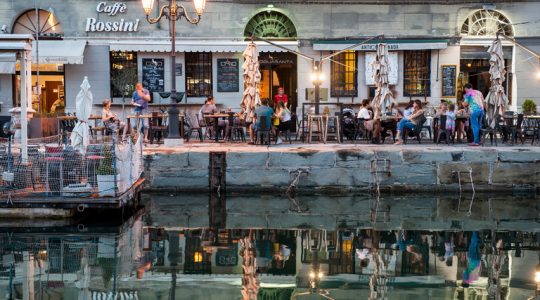 A distinctive Adriatic experience awaits in this Old World city, with its broad, breezy plazas, coffeehouses and cozy seafood restaurants.

Trieste is famous for its cold, gale-force Bora wind, and indeed, all manner of creatures and people have blown through the seaside city in Italy’s far northeast, next to the Slovenian border. Dinosaurs and Neanderthals once roamed the limestone hills of the Karst region, and legend holds that Jason and the Argonauts sailed in with the Golden Fleece. Empires breezed in, too, notably the Roman and the Byzantine. But it was centuries of Austrian rule that left the most enduring mark. The House of Hapsburg built much of Trieste’s regal core and left a permanent mark on its gastronomy — evinced by the beer, sauerkraut and strudel on many restaurant menus. The winds also brought James Joyce, who lived intermittently in the city in the early 20th century. But Trieste is hardly a gusty relic. A new high-tech photography museum, an expanding night life area and a fancy new nearby marina, Portopiccolo, join the Old World churches, picturesque piazzas, sumptuous palazzo-museums, classic Austrian coffeehouses and cozy seafood restaurants to create a distinctive Adriatic experience.