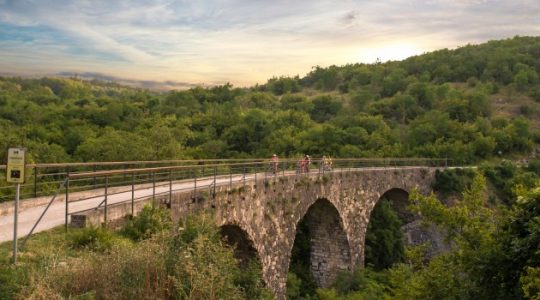 The itineraries available to those who love two wheels

Today, bicycle is the new frontier of sustainable travel, and Trieste is the perfect cultural pathway within the dense network of cycle routes that descends from Mitteleurope. Or those that, crossing from East and West, connect the Danubian area to Mediterranean Europe. The elimination of borders has transformed the old smuggling routes of the Trieste Karst into a web of enjoyable and unblelievable cycle paths.

Today those tracks have been connected to each other on order to create real itineraries. Here they are:

Arriving from outside Trieste, it is worth trying the 51 km pathway from Monfalcone to Muggia, a discreet ride in the mileage, but not difficult. And certainly very suggestive. It is the Via della Salvia, which actually connects to the AdriaBike (Fvg2) cycle route from the Tricorno’s in Slovenia to the Parenzana’s in Croatia.

Starting from the back of Monfalcone’s port you cross the Foce del Timavo, Villaggio del Pescatore, Duino, Sistiana, you take the panoramic Weiss path, better known as Sentiero della Salvia, overlooking the sea, then take via del Pucino with its precious vineyards and outstanding view of the entire gulf.

Getting off Miramare, once you arrive by the coast of Barcola, you may take then the shortcut to the Old Port until you reach Piazza Unità in the heart of Trieste.

It is now time for a little stop to enjoy the finest tour of the city center. Afterwards you may take the Cottur pedestrian path in San Giacomo and arrive in Val Rosandra, then to the Noghere, Rio Ospo and finally to Muggia.

In 3 and a half hours, including the Trieste’s quick stop, the excursion is completed.

From the Trieste sea to the Slovenian woods, the Cottur pedestrian path passes by Trieste-Kozina-Lokev-Lipiza-Trieste: a little less than 50 kilometers with a total height difference of about 700 meters. It starts and finishes on the legendary cycle path dedicated to Giordano Cottur. A very fascinating ride, which at least up to Kozina it could be easier with an electric pedal assisted bicycle as the beginning is slightly uphill, first among the houses and then in the woods above the Val Rosandra. Through old railway tolls and tunnels that light up as cyclists are passing by, you cross the border with Slovenia and arrive, after about 17 kilometers, at 465 meters above the sea level in Kozina.

Continue towards Divaccia, passing by Rodik and Kacice Pared, then turn left in front of Gostilna Godina to take the path that leads straight to Lokev and then, on asphalt, to Lipiza.

Here, after running along the golf course, proceed to Basovizza by taking the Ressel path on the right, turn left at the junction with the white road. After 2 km you pass the town center and follow the signs to the Foiba.

There is a long ride on the Provincial Road 11 to Sant’Antonio in Bosco where you may return to the Cottur’s path. And almost without touching the pedals you will return to the starting point.

This cycle path follows the ancient Austrian route that connected two seaside towns, Porec and Trieste, via railway along the heart of Istria.

The original route of the Parenzana’s, the one that was slowly followed by the narrow gauge train from Trieste to Porec, is currently usable starting from the mouth of the Ospo’s river, almost 2 km from the center of Muggia. The advice is to start from there, reaching Muggia with the Delfino Verde’s boat from the shores of Trieste.

The Istrian countryside will welcome you with its charm of medieval villages, vineyards and olive groves, and rolling hills that end in the Adriatic sea.

Every year by the end of April there is the much-loved Istrian cycle event, starting from the beautiful Grožnjan (Grožnjan).

The magnificent Istrian hinterland is crossed for a day by a huge number of old bicycles, and cyclists with the old clothing of that time, to recall the exploits of the champions of the past and their bikes steel made.

Moreover in Trieste there is the possibility to visit the one museum of the very old bikes, with extremely rare specimens collected and cataloged by Franco Bortolussi of the Società Ciclistica Gino Bartali. Ask the front desk to arrange a visit to this magnificent private museum.

And if you don’t have a bike, but you want to pedal, there is no problem. We will take care of providing you our bikes, helmets and expert guides.